Due to the earthquake consequences permanent exhibitions are closed until further notice!

Guides
For all organized group visits, Gliptoteque provides expert guidance through permanent exhibitions.
Group visits must be announced in advance.

Taking photos
is not allowed in the exhibition area.

Museum store
It is possible to buy museum publications inside.

How to Reach Us

CASA The Glyptotheque is unique in its purpose in Croatia. It was founded in 1937 under the name Gipsoteka with the aim of presenting the plaster castings of the architectural plastic of immovable monuments of Croatian cultural heritage. Her museum fundus has long been enriched with numerous relevant works of Croatian sculpture from 19th and 20th century. So, with the entry of Gipsoteka into the composition of the Croatian Academy of Sciences and Artsit was renamed to Glyptotheque. There are more than 13,000 exhibits in its museum fundus today.

Glyptotheque (Greek glyptos - hollowed out, and theke - a reservoir, in the original meaning collection of gema, and in the broader meaning Sculpture Museum) is located in the former industrial building of tannery, whose construction began in 1864 and gradually expanded to the largest industrial plant in Zagreb; in the 1926 fire destroys most of the plant, and in 1938 the tannery stops working. Founder of Gipsoteka, prof. Dr. Antun Bauer, initiated its relocation in 1940 to a former industrial object of tannery.

During the Second World War there were a number of warehouses in most of the complex. Since 1950, Glyptotheque is an integral part of the Croatian Academy of Sciences and Arts, and it profiled itself as a sculpture museum where sculptural creativity from antiquity to today can be seen. In addition to the existing museum complex, in 2000 the Sculpture Park (realized by the academician Miroslav Begović) was built. Today, Glyptotheque has a space of more than 14,000 m2 which keeps and exhibits the largest collection of sculptures in Croatia, both the plaster castings and the original works of the Croatian sculpture from 19th and 20th century.

The museum fundus of The Glyptotheque was based on donations, works of art and repurchases.
CASA Glyptotheque is a member of the International Committee of ICOM Museums at UNESCO. 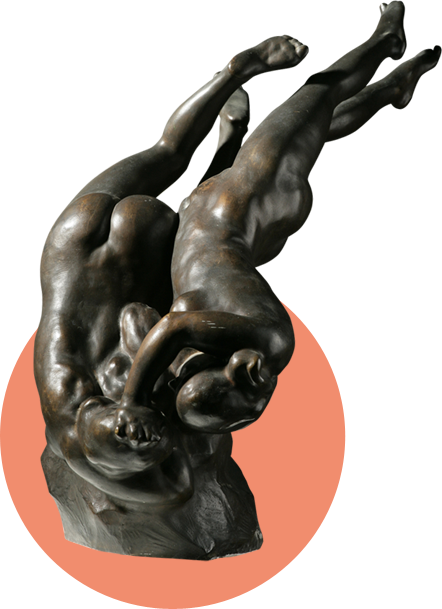